When I went to A New Day music festival in August.  I was walking down  the sloping natural arena of a field towards the beer tent and a middle aged lady started laughing at me.  I just shrugged my shoulders and carried on to the beer tent.  I purchased a pint of ditch water, I mean bitter. Four quid for a pint of cat wee.  An hour earlier I had been purchasing pints of bitter in Wetherspoon's for just two Pounds a throw

The lady had only followed me into the beer tent and smiled and  I said to her:

"I thought you were laughing at me?"

She laughed and said:

Then she told me she was looking at my t shirt.  It was my Night Of The Prog festival T shirt from 2017.  Which was in Loreley in Germany.  Her son was in one of the bands listed on the back of my shirt.

She was Norwegian.  So I said: Ole Gunnar Solskjaer.

A Norman Wisdom song began to play in my mental jukebox:

Division Time For One Of The Phormium Plants.

Many of the plants living here both wild and cultivated species come from overseas.  The Griselina cuttings I potted on the other day are a... 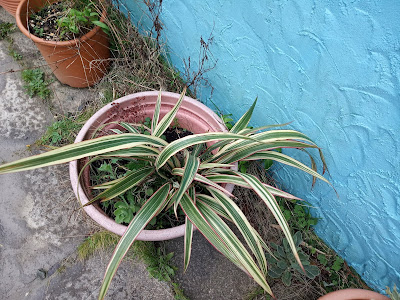 northsider
I am half Irish and half English, born in northern England, own a smallholding and also a polytunnel too!