12 Round Bales Of Barley ("I've not been eating the potatoes but the slugs are."

"Yea."  The silage contractor did arrive on Saturday and did manage too cut and harvest us twelve bales of barley. Since Monday it's been sunshine and some very heavy down pours.  The sunshine and rain should hopefully provide the right ingredients too make the other fields grow.  So the cattle will have lots too eat during the winter.

Historians say it's the saving of hay that helped the Romans conquer the world.  Apparently they never visited Ireland ('Hibernia': "Land of eternal winters") but they knew of it.  Me not understand?  How can you know of somewhere if you have never visited it?  Mind you millions of people believe the Titanic was sank by an ice berg.  But nobody ever took a picture of it, did they?  There's also a theory that man never went too the moon.  It was just Hollywood movie sets.   I digress.  The saving of hay allowed the Romans to travel by horse even in winter when the grass didn't grow.

Any road.  We got twelve bales of barley and the barley growing experiment looks too have been a success.  The Fodder Kale is also doing very well.  I say lets get away from monoculture and grow something different on the land.

Lifted some potatoes the other day.  It's been far too hot to eat them lately.  Noticed some holes in some of them.  So we soaked them in a basin of water and waited to see what crawled out.  Black slugs are the culprits.  It doesn't matter what you grow.  There's some creature too destroy your crop or you.  The old 'Doctor Flies"have been taking chunks out of us all.  Think they are horse flies.  They call them "Doctor Flies" because they land on you and give you a painless injection.  Then your arm throbs with pain.  Good job we always keep a packet of Piriton tablets in the cupboard.

Here's a photograph of the mower cutting the barley into windrows.  You can see the fodder kale growing too.  That's Bantry Bay in the background.  The old digital camera is still displaying the wrong date - sorry! 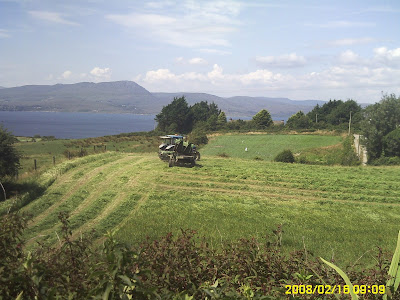 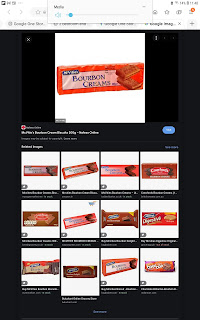