I have seen two good Prog Rock  bands in the last twelve months: Kaprekars Constant who I featured their Hall Sands video on here and Karnataka (check them out!) both at A New Day Festival and I previously saw KC a week earlier at Cropredy.

Kansas are probably my favourite Prog band and like Debby (Life's Funny Like That blog). I have been lucky enough to see them live.

I saw them in 2014 in Warsaw.  It was the fulfilment of a long held dream to see them.  I had listened to them in my teens and it was over thirty years later that I finally got to see them play live.  They certainly didn't disappoint.

Have you seen Kansas?

They originated in Topeka and were originally named White Clover which they changed to Kansas.

Zero Grazing For The 'Indoor' Pigs And Poultry.

Yesterday  it wasn't raining for a change  so I decided to clear a bit of the grass growing on ye olde veg plot.

It was once a little paddock and I inherited a bit of couch grass which I think I may have added to with the tons of fym I have applied to it over the last twenty or so years.

Being a natural none chemicals  gardener I can live with pernicious weeds like grass and nettles.

Instead of composting the weeds I fill a couple of wheelbarrows and feed it to the 'indoor' pigs and poultry.  They love it! 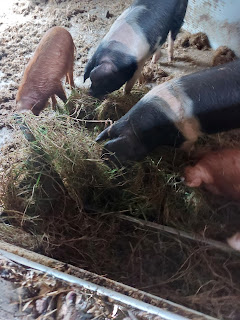 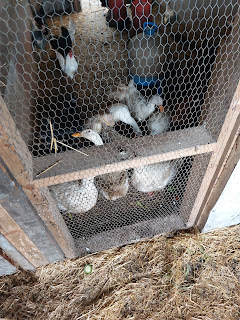 All ducks and hens have to live inside at the moment because of Avian flu in Ireland and the UK and England even.
Yet I was in a posh supermarket very recently and they had Free Range Turkeys for sale🤔.  Well that's what was printed on the plastic wrapping.  Perhaps it was old packaging they used?
They like the grass and weeds and old bread and vegetable peelings like the pigs do.

Do you give grass and certain none poisonous weeds to your livestock?

Ode To Our New Kettle.

We bought it for  just 25 Euros in Lidl.

Picked it up in the 'specials' aisle in the middle.

It really is in fine fettle 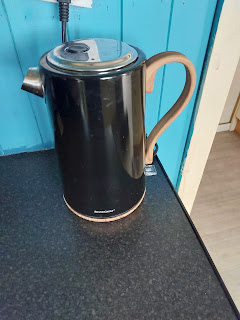 A poem for JayCee in celebration of her new kettle purchase.

"How Do The Salt Gritter Drivers Get To Work?"

I took this photo last Friday when we were driving from Kerry back to West Cork the other day.  We had been to a scrapyard in Tralee for some parts.

The middle of the road was full of pack ice and snow.

It was a very precarious  journey and I was not an happy bunny sat in the front pedestrian seat.  The CD and radio is not working due to taking the battery out to start some machinery on the smallholding and needs recoding some time.  So we couldn't listen to local news bulletins or Classic hits my favourite radio station here in Ireland.  We had to conversate now and again and I looked at the internet when I had a phone signal.   I even cracked a few jokes which someone said :

"They were good the first thousand times!"

They had obviously not gritted the back roads and it was good to get back to the main roads where the grit salt had been spread.  The road was very high and meandering.  Perhaps it was far too risky to drive a salt Gritter on such a road?

Do you have rural roads that don't get salt spread on them?   Or perhaps it's  too dangerous to grit them?

Thanks for your comments on my last music post.  I get hundreds of views when I post them.  It's K next.  I wonder who that will be? Another clue: Dorothy lived in that county? Her dog was the name of a Californian Heavy Rock band: Toto.

For Tommy And Gina.

Continuing with my A to Zee or Zed of my favourite Rock bands and songs today I would like to mention Jon Bon Jovi.

I was lucky enough to see Bon Jovi at Castle Donington Monsters of Rock Festival way back in 1987.  It's in Derbyshire and in the grounds of the motorcycle racing track and you can walk under the giant archway  tyre that straddles the tarmac track.

It was a gorgeous Summers day and the crowd was like a biblical multitude of 100000 punters.  Bon Jovi flew over the crowd in two white helicopters with red Bon Jovi letters emblazoned on the sides.  They waved to the world and wife and I don't think Wasp who were playing on the main stage liked being upstaged by them.

The title of my blog mentions Tommy and Gina who were characters in their hit song song 'Living On A Prayer".  Which they mention again in "It's My Life".  Which is probably my favourite song of theirs.  It also mentions Frank Sinatra and his classic:  "My Way" song.  The following song is about living your life to the full.  Enjoy!

A Creep Feeder For The Young Pigs In The Field. 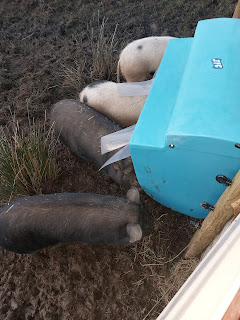 We have two Vietnamese Pot Belly Pigs and two Gloucester  Pots clearing some neglected/ overgrown pasture at the moment.

To give them a hearty feed number one son bought this plastic lamb feeder.  You open the top and fill it with pig ration and the piggy wigs stick their heads under the rubber flaps and their noses and mouths can reach the ration.  They love it!  I will never call Self Service again!

They love the creep feeder and the rubber flaps keep their backs dry in the rain and snow.

I wonder if they make one my height with a barrel of Newcastle Brown Ale in it?  It can be cabin fever at times in Northsider Towers at the moment.  Especially when wifey starts Hoovering or plugs in the hair dryer.

Perhaps I should build a man shed? My polytunnel office is a bit cold at the moment.

Anyone else keep pigs or thinking of getting some this year?

A Look In My Polytunnel On A Cold Winter's Day. 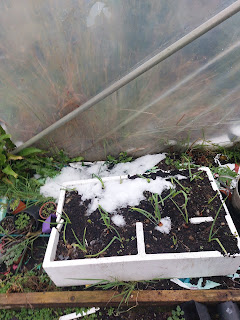 Snow has fallen through the ripped cover of 'Portugal' my poorly polytunnel pal.  The Japanese onions aren't bothered though.  It's probably the same weather where they originate from in Japan? 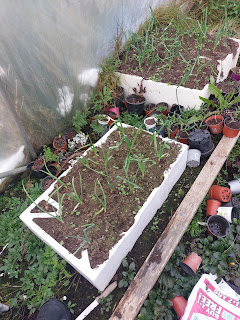 More Winter onions thriving under the plastic. It looks like the wind has been blowing plant pots about a bit. 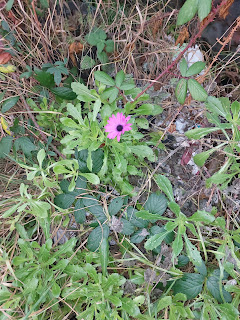 A Osteospermum or Cape Daisy in flower already.  They originate in South Africa and not keen on the frosts on the Irish Riviera here in West Cork.
I always over winter tender perennials inside the tunnel since I lost most of mine in the Winter of 2010 and all my cuttings have been  made from two survivors when we had snow for two weeks.

Still no prospects of getting on any of the gardens.  Is anything flowering in your garden at the moment?  What's going on in your polytunnel or greenhouse?