More Make Do And Mending On The Smallholding. 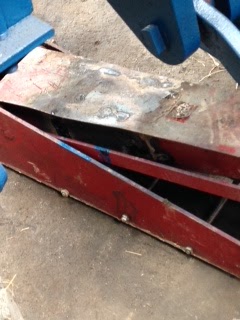 The jack back at work.  It's a lot stronger and just needs a lick of paint.  A welder and a cutting torch are useful pieces of equipment on a smallholding.
- August 27, 2015 16 comments:

A Mixed Week On The Smallholding.

It's been a mixed week here on the smallholding here in West Cork.  The weather's been a let down like the summer and a calf died, sadly.

I think April was spectacular, a few days in June to make square bales of hay and a odd few days here and there.  Make up the summer.

Here's a few pictures of what we and Domino have been up to the last week. 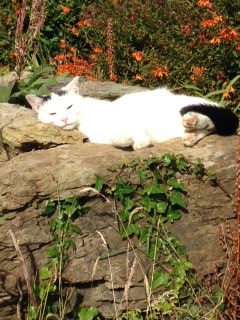 Some times the sun shines (for 5 minutes) and Domino makes the dry stone wall into a sun lounger. 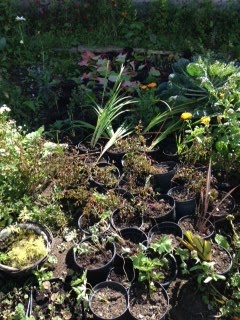 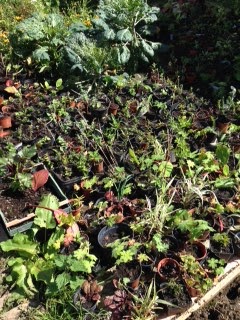 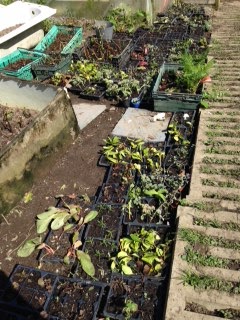 The plants nursery.  We have split perennials and rooted over two hundred cuttings.  I will sell them and make some more next year.  Dogwoods are dead easy to root.  Just get your secateurs and make yourself twenty, fifty or an hundred cuttings.  Take the leaves off them and plant the plant like pencils in the ground.  Come next spring they will be sprouting leaves and they will be ready for potting on. 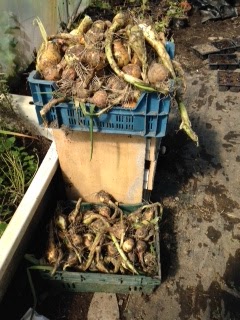 Lots and lots of onions harvested and drying in the poly-tunnel.  "Any body want some onion soup?"  We sometimes have a mad fit and peel a load of them then chop them up ("where's the gas mask?") and place them in plastic freezer bags or a carrier bag and throw them in the freezer. 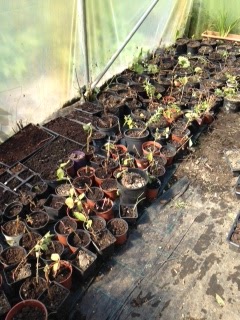 Intensive car unit in the poly-tunnel.  These are fragile perennials and root cuttings.  We have also got some some Rugosa rose hips seeds sprouting in trays.  I read that you are supposed to freeze the seeds to make them germinate.  Ours are sprouting already.

Not Blogged For A Week.

I have felt a bit guilty of not posting much at the moment.  So what have we been up to on our smallholding?  We bought some more calves, cleaned some of our copper and brass collection.  We decided to lacquer the one's that are permanently on show to us.  A brass goat and a horse a miners lamp once belonged to my late dad.  So I have them in the kitchen/diner next to the television.

We also cancelled Sky and I am regretting it very much.  There is no proper sport on terrestrial television.  I had to listen to the BBC Test coverage on You Tube and it's Football league highlights on Channel 5 on a Saturday night.
We only really watch the Beeb channels, Channel 4 and 5 these days.  Except for Sky Sports and some of their other channels. So with an heavy heart we cancelled our 120 Euros a month subscription/mortgage.  It's a lot of money but when you don't live near a pub or have a social life (isolated life on a smallholding) it was worth paying it. Was it? Now I have just found out ITV aren't showing the Champions League this season.  Bloody hell!  Me thinks I might have to listen to my beloved Manchester United on the old web. 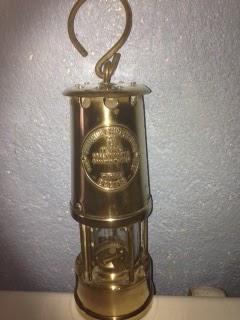 The miners lamp came from the miners lamp company in Eccles (where the cakes come from) and I think it must of been a retirement gift because it doesn't show any scratches or dents.  It's sad (in a way) that the only reminder of our mining heritage is mine memorabilia and brass bands.

Watched a BBC 3 or 4 documentary about Sellafield the other night.  Those eery lakes full of discarded isotopes, fuel rods ands nuclear waste left me thinking what a crime it was for the Tories to close down the mines.  There are said to be 200 years of coal still under the ground in the UK.

Time for a song.  The Unthanks (the band I keep playing at the moment and saw live the other week) singing the: The Testimony Of Patience.  It's about a lady miner.

Seven Bags Of Ragwort Collected From A Field On Our Smallholding In Ireland.


Number 2 son and myself spent a couple of hours yesterday pulling Ragwort by it's roots and bagging it up.  We both wore gloves because it's said to be very harmful to animals (lethal to horses) and farmer's livers.  Apparently our skin isn't waterproof.  So you should always wearing gloves when pulling Ragwort.

Farmers have told me cows browze graze around Ragwort plants.  I know it's lethal to horses and I am not letting our calves eat it.  It's also very dangerous if you make hay or silage with Ragwort in it.

There is even a noxious weed act here in Ireland dating back to 1936.  Years ago there use to be noxious weed officers who would visit farms and even local authorities could be made responsible for having these weeds on their land.  I think county councils are the worst culprits for spreading Ragwort seeds. 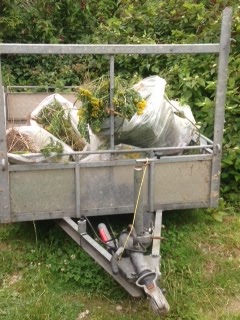 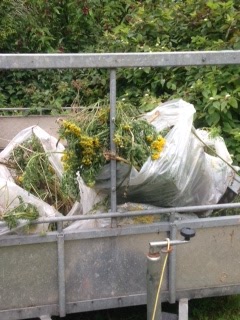 Seven bags of Ragwort.  How will I dispose of the Ragwort?  Councils should provide free disposal skips for the Ragwort shouldn't they?  I believe you can compose Ragwort or even burn it.  Do you pull Ragwort?
- August 08, 2015 16 comments:

Making Logs On The Smallholding For Our Kitchen Range.

It's been horrible weather here on our smallholding in West Cork, Ireland.  We have calves out in the field using the cowbox for a field shelter and we have calves inside the slatted house eating hay, calf crunch and drinking their milk replacer twice a day.

So what have we been up to down on the farm?  Number one son came home with a pto driven saw horse.  It's the best thing since sliced bread.  The tractor (Ford 4600) turns the power take off and that turns two belts that makes the saw spin. 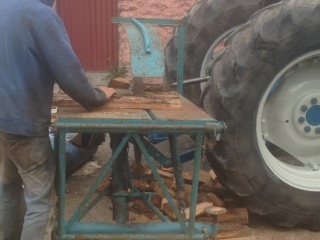 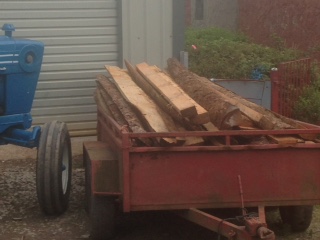 We purchased a trailer load of beam slat wood.  The sides that come off the sides of wood beams.  It doesn't take long to make a decent pile that fit just nicely in the top of our Stanley range.  Anybody else getting their logs ready for Winter?