When People Don't Get My Jokes.


When I went to a campsite the other week.  We found a campsite and went in the office,shop and the campsite owner said:

He didn't laugh!  I was only trying to break the ice.

Wife drops me off at Shannon airport.  I don't bother having a pint or buying any food.  Catch nine thirty Ryan Air flight to Bristol.  Lovely morning.  Highlight was flying over Cardiff City ground.  Well done Neil and the lads for getting promotion!

Plane lands after only forty minutes.  Spend nextsix hours people watching at Bristol airport.  Sat outside on benches in carpark most of day.  The world and his wife seem to be going on holiday today.  Only person who makes a conversation with me all day is Irish.  Typical!  Buy cheap sandwich and a tin of farmhouse Devon cider from Marks and Sparks shop in airport.  Not paying airport bar/restaurant prices.

Six hours later, friend arrives from Warsaw.  Pay thirteen Pounds for a return ticket to Bristol Temple Mead Station and back to airport.  I later lose this ticket!

We missed the train to Weymouth by twenty minutes.  Caught Portsmouth train to Bradford on Avon.  Three carriages packed with commuters.  Passengers practice New York stare. No one speaks.

At a station a guard shouts for people to move up and let more sardines (passengers) into carriages. I tell him to put some more infrastructure/rolling stock and say: "Come back British Rail all is forgiven!"  In India you could ride on top of the train.  I was not impressed with South Western Railways!

Walk round Bradford On Avon.  Beautiful place with buildings made out of Bath stone.  Walked in to a chip shop and chip-shop seller asks us if we want anything?

My friend disappears and goes off taking photographs and I walk into a grocers/off licence and by a bottle of dog or Newcastle brown ale and a bottle opener.

Sit on railway platform and drunken man asks me how much: "Are the chips?"  I tell him and he asks me for fifty pence.  I give it him.  Open my Newky Brown.  The inebriated young man comes back with chips and puts thumbs up to me.

Friend says drinking outside is a no no. Can't in England now.  Is this so?

Catch train to Dorchester for hour and a half journey.  I learn about requested train stops.  You tell the guard which station you want to request for it to stop.  This is very strange!

Walk through Dorchester town centre.  Friend tells me The Mayor of Casterbridge lived there.  Then he shows me house where Thomas Hardy worked has an apprentice.

Pubs closed so we go in kebab house and buy botles of water each.  We walk a couple of miles towards campsite up an a track where TH use to walk.  It is pitchus Blackus and we are not far from from thd campsite.  My old friend panics and realizes he hasn't got his small rucksack containing passport, boarding pass etc.. Must have left it at kebab house.

I am now on my own up a country track and start thinking about mad axe men/women?  I can't standstill.  So I walk back along the track.   Suddenly I wonder if my fried left his BIG rucksack with me?  I am such a fool.  I start lloking for his big rucksack with my mobile phoe,  The Big rucksack is nowhere!

Half an hour later I here footsteps.  Who could its my friend with his small rucksack. I try to explain that I have mislaid his BIG rucksack.   He tells me he took it with him!  Phew..!

Walk further along dark lane.  Strap breaks on rucksack.  Walk a bit further and other strap breaks.  I am now carrying rucksack and tent in my arms.  Wonderful!

Arrive at campsite,  We manage to pitch tents at 1.30 in morning in pitch black.  Will pay for tent pitches in morning!

Cheap Pub Grub And A Pint For Six Pounds Fifty.

Before I went to Doolin I spent seven days visiting Thomas Hardy country.  I will show you some of the Wessex locations in future posts.

One place that really impressed me was Wetherspoons.  My old friend and myself visited the Wetherspoons in Hardy country.  They didn't mind us plugging our phone chargers in to their plug sockets and I ordered a pint of Sharps bitter and a burger and chips for Six Pounds Fifty.

I always thought Southwest England was expensive but Wetherspoons proved me wrong.  I have noticed quite a fw rural pubs and shops close their doors for good here in Ireland.  Its good to see a thriving pub chain offering cheap food and drink in England.  Hopefully the lads and lasses will be able to celebrate England winning the world cup with a cheap meal and an inexpensive pint.

Here's my final post about Doolin Folk festival for your perusal. 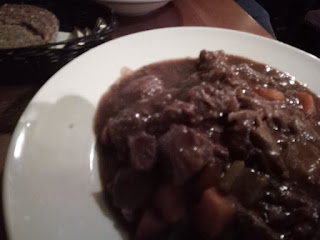 Irish Stew or Police man/woman's favourite: "I arrest you!"  Old joke.  I went to the bar and said to the barman that I would like to pay for two Irish stews.  He asked me: "If I was hungry?"  Then we laughed and  I said that I hadn't ate them both. 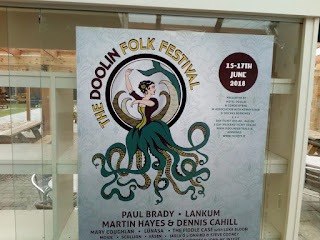 Poster from the festival. 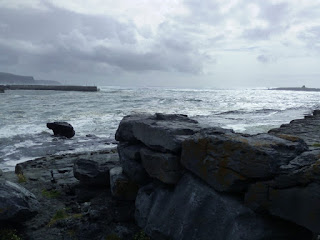 The Atlantic.  You can see Crab island on the right of the picture with the remains of an old lighthouse.  If only the folk festival had been this weekend.  Its glorious weather here again.  Its the best weather I remember in Ireland since 2003 when we built our bungalow.

Here's two videos for you.  I saw them both at Doolin Folk Festival.

Muireann is from county Kerry.  She reminds me of Clannad.  I have seen them twice in Manchester.  Muireann should be really famous.  She was excellent.  I often wonder why some musicians and performers never become really famous.

This is Dr Mind flip.  Who we saw upstairs on the White Horse Stage.  They reminded me of Captain Beefheart and Frank Zappa.  Brilliant musicians with a natural gift of self deprecation, humour and some excellent music.  This band deserve to be really big.  Even famous!  The lead singer even wore a white coat.

My favourite turn (act) from Doolin Folk Festival was Katie Theasby.  I mentioned her before in a blog post post in March.  This was when I posted her You Tube video of the Finbar Furey song:  I Remember You Singing This Song.

Any road or any way.  I got there early on Sunday afternoon before the biblical multitudes arrived and filled the new "Barn " building.  Katie Theasby and her band carried out a sound check and sung a song or three.  Then she was introduced and gave a wonderful performance.  She sang: I Remember You Singing This Song twice during her set.

It was Fathers Day and I was feeling tired and emotional and I had just watched the great Cork songwriter Jimmy Crowley upstairs on the White Horse stage.  He had been singing and talking about what really matters like family, home, God and beauty and a myriad of other things.  Well Katie singing I Remember You Singing This Song made me start to shed a tear or three I started to cough and wiped my eyes. 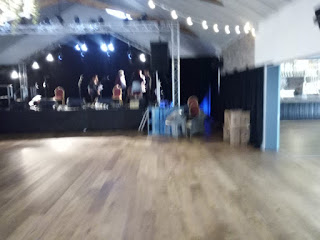 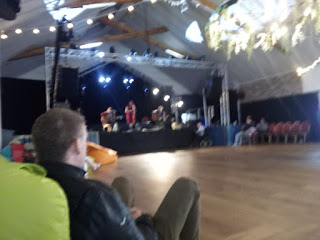 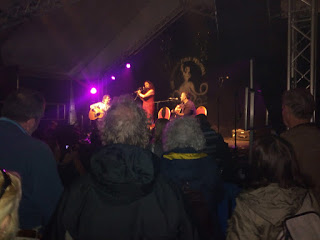 After the concert.  My old friend and me were having a pint of the black-stuff and Katie Theasby walked through the bar and I pointed (shouldn't point Dave) my finger at her.  Katie smiled back at us both.  I hope she makes it big, she deserves it!

Here she is singing the Bob Marley classic: Redemption Song.  The last picture is Katie playing tin whistle on this song.

Back From Doolin Folk Festival And A Walking and Public Transport Tour of Hardy Country.

Hows it going?   I have been to Blighty for a week and to Doolin for nearly five days.  We spent one night in a hotel near Bristol airport.  And the other ten roughing it in tents.  I felt like I was a posh tramp.  Here's some photos from Doolin for you.    You would think it never rained going off the photographs.  But of course it did! 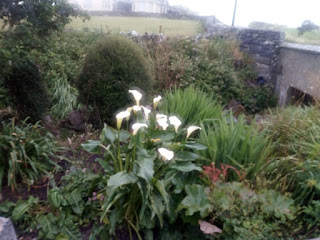 Arum Lily's in bloom.  My grandmothers still grow in our front garden.  The frost got ours this year! 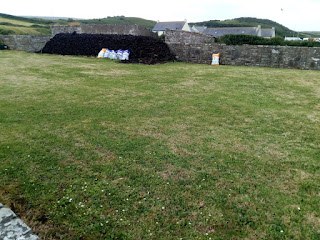 A stack or reek of turf or peat. 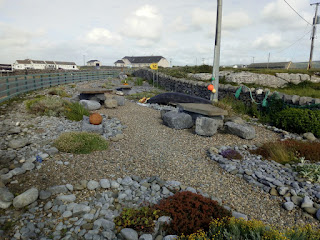 Some clever people made a garden out of pebbles complete with a table and chairs.  Its planted up with seaside plants like Thrift... 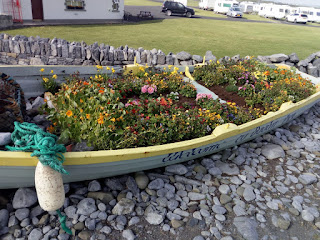 A boat planted up with bedding plants.  Its great when people make an effort to make their town look so attractive and welcoming. 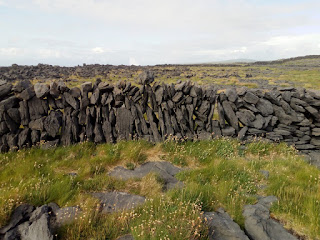 Ancient dry stone walls near the ocean.  I think they are a work of art made by man and nature. 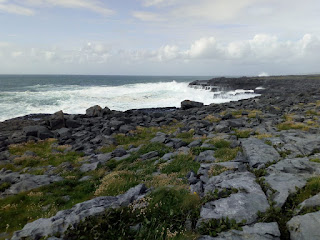 Friday night was the best in Doolin.  It rained and the wind  made my flysheet flap all night.  At quarter to four in the morning.  A twelve inch long puddle formed inside the tent.  This then proceeded to give me an early morning shower.  I was dying for a wee and my t shirt was saturated from the impromptu shower in my tent.  So I quickly ransacked my rucksack come wardrobe and changed.

Then  I put on my walking shoes and walk the hundred yards or so to the toilet block in a newly changed t shirt.  At least it was raining  and my t shirt was getting wet.

I later related my night of the wet t shirt story to other happy campers in the campsite laundry who happened to be also trying to dry their clothes.  Two of them shared their stories of puddles and shouting expletives at four in the morning.  I didn't feel so bad and realized I was a member of an elite club or tribe.  Hey that's a good link Dave.

Here's a song by Luka Bloom who played with the band Fiddle Case at Doolin Folk festival.  I have seen him before at Killarney Folk Fest. He never disappoints.


More about Doolin tomorrow!  Perhaps this could be the start of a book about Doolin Folk Festival.  It's good to be back blogging!

The Kitchen Window Sill Allotment And A Picture Of The Veg and Perennials Plot. 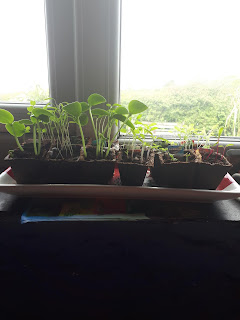 Lidl have been giving away vegetable seeds with every purchase over twenty Euros.  You just add water and the pod grows into potting compost right in front of your very eyes.    There are Basil, Cherry Tomatoes, Rocket, Beetroot, Radish, Spring Onion, Lemon Balm, Carrot, Aubergine, Cress, Gherkin, Lamb's Lettuce, Dill, Cucumber, Coriander, Salad Mix, Chervil, Parsley and Thyme.  I think its a wonderful way of showing kids how things grow on the windowsill.  Don't you? 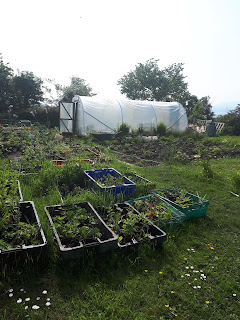 The Veg Plot.  I have potatoes growing next to the poly-tunnel and on the other sides.  The plastic boxes are full of perennials that I have made by splitting and from cuttings.  They will be sold at a car boot sale or to some one for the garden.  I put two PLANTS FOR SALE  signs in  the window the other week.  Not that many folk walk round the lane. Up to now only one neighbour came with four of her pots for me to fill with plants.  I ended up giving them to her for free!  Some budding business man am I eh?
- June 03, 2018 14 comments: