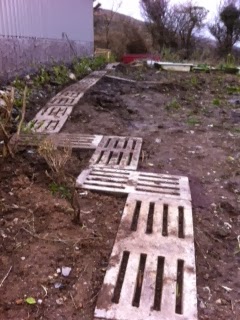 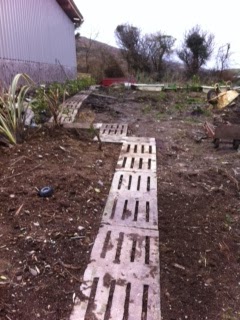 Been busy making hard surfaces for ye old veg plot yesterday.  A kind Bantry farmer sold me a trailer's worth of old  concrete pig slats.  I asked him how much he wanted for the slats stood up against his farm outbuildings:

"Give me forty Euros".

"I'll give you fifty for them.  They are worth it to me."

Then I noticed some more slats and asked what he wanted for the them:"

"I wants nothing for them.  You give me more than I wanted.  So you can have them for free."

What a kind man.

I persuaded my brother and number one son to go and collect the slats the next with the trailer and Jeep.  My brother and Number one son heaved and humped them and brought them back to our smallholding by the sea (Bantry Bay) and I had to give him 20 Euros for Diesel.  I think it was very cheap for some more smallholding projects, don't you?

We made a slatted pig tank (for 2 pigs) and a hard path for the vegetable plot.  Thinking of sprinkling some grass seed in the gaps to disguise them a bit.  Now even on the wettest days.  I will be able to get about on the veg plot with my trusty wheelbarrow and spread farmyard manure and compost from the paths without leaving giant ruts in the soil.  Who invented the wheelbarrow?  Is there anything more ingenious than a wheelbarrow?  What do you use for paths on your vegetable plot?
- March 08, 2014