Some Interesting Plants On The Smallholding. 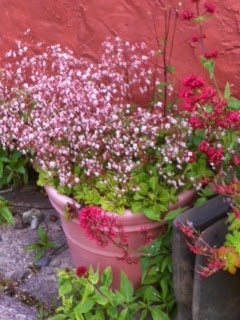 This is a picture of one of our plant pots outside our little cottage (cosy dwelling) here in beautiful West Cork.  The pink flower is Saxifraga Umbrosa ("London Pride").  This traditional perennial rapidly took over (colonized) the Blitz bomb sites in London during the second world war.  Noel Coward wrote 'London Pride' celebrating London and this wonderful flower.  It was seen to be a symbol of resilience and the futility of the Germans thinking they could bomb Londoners into submission.  I love perennials and they are so easy to divide over an over again.

You can also see the red (pink?) Valerian poking its head into the picture.  They are said to attract rats and cats.  Apparently its the Actinidine in the oil of the flowers that attract the rats and cats.  It's traditionally a seaside plant and it self seeds every where.  The one in the pictures is growing from a crack in the mortar in the paving.  The other flower is a fragrant geranium.  I think its called geranium mandaresa?  No doubt you will tell me. 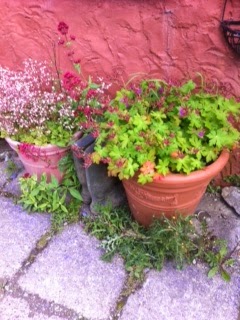 The wellingtons are no longer in smallholding service because they have holes in the toe part.  So I placed them in between the plant pots and I think they make a nice garden feature.  The milk thistle in the paving was planted by the weed gods in front of the terracotta (real plastic) plant pots.  Even milk thistle is useful for liver complaints.  There seems to be a use for most plants, wild and domesticated.  Do you love herbaceous perennials? When do you make cuttings or do you just divide them?
- May 27, 2014