" I Don't Think You Will Get Bored of That View." "I Doubt It!" (RiverCottage Australia.)

We watched the first episode of River Cottage Australia last night with Paul West.   It showed him rabbiting with ferrets and a Dalmation ("Currant Cake") dog.  Paul also introduced us to his Collie cross called "Digger".  The dog was a loveable rogue and full of devilment and adventure.

Paul then showed us how to make: 'Cow Pat brew'.  Sounds like one of my attempts at making homebrew bitter.  Apparently his liquid fertilizer contains iron, magnesium and sulphur.  I think the stinging nettles will have helped with a lot of the ingredients.  Years a go they use to make ropes and army uniforms from nettles - itchy!

Also in the programme we saw sausage making, cheese making. crab apple relish, cheese cake making and hand milking a cow.  We really enjoyed the first episode and can't wait for the next.  The only downside is the wife would like a veranda!  Roll on summer and sitting outside.
- January 12, 2015 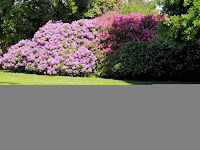