Sorry I haven't blogged for a couple of weeks.  I got myself another bargain the other Sunday morning.  It's an oil painting about eight inches by eight inches.  I paid the princely sum of two Euros for it.  To those of you who were good at metalwark at school.  You will know it's the 'Gleaner's" painted by Jean-Francois Millet. 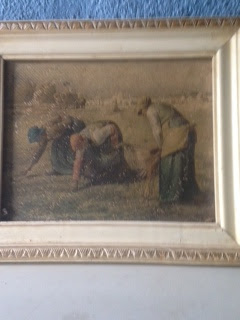 Apparently even today peasants in France have the right to glean the fields for Corn...  I love the colourful dresses and I think rural life should always be celebrated no matter how hard and difficult it was.

I couldn't believe the Brexit result.  Yes we all know the EEC is far from perfect.  But what power will the UK have now she no longer will have any say?  But there is however talk that the British Parliament can vote it out and the Queen can have the final say.  Suppose if all else fails.  British businesses and citizens can always move over here to their near neighbour Ireland and live in an EEC country?