Yoghurt For A Bull Calf. 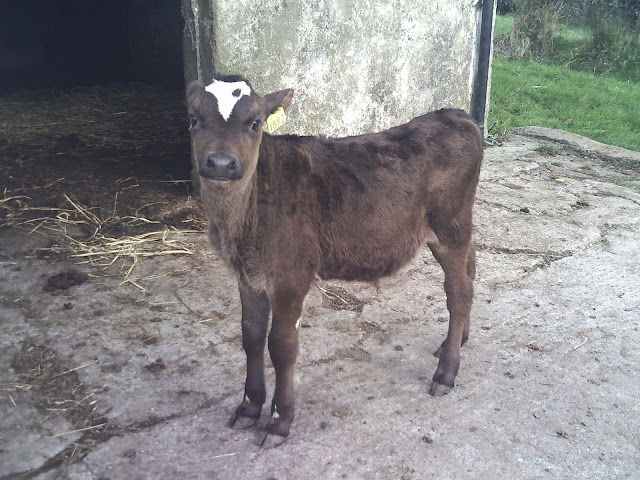 It's been a  week full of worry down on the ranch (West Cork Smallholding) here in Southern Ireland.  Lightning one of our new bull calves decided to imitate me and grow a beer belly.  I went in to the cow stall and noticed both his sides seemed very swelled.  Lightning is a very greedy calf and he's always the first to the calf crunch in the trough and always last to leave it.

Any road folks.  Lightning's stomach seemed to get bigger and bigger.  So I decided to Google cattle complaints ("Why's it always raining?") like bloat and poisoning....  We put some liquid paraffin down his throat and worried ourselves silly thinking he might have ate some wild Parsnip or deadly dangerous plant. We rang the vet and he asked if Lightning was passing water and making country pancakes (think about it) and chewing his cud?  We told him that Lightning had not lost his appetite and he'd just done a delightful plop.  The vet told us not to be alarmed and to go to the supermarket and purchase him (Lightning not the vet) some tubs of Yoghurt (they pronounce it "Yo -girt" here, rather similar to how you say Yogi Bear.

Anyway I got out my dosing gun and diluted the Yo girt with some milk and attempted to give Lightning some down his throat.  Lightning started to lick the Yoghurt and freely (nay devoured) ate it  of his own accord.  Apparently it's like giving him a pro-biotic for good bacteria to break down any yeast fermentation in his stomach?