Hoping To Make Hay While The Sun Shines. (Don't laugh!) 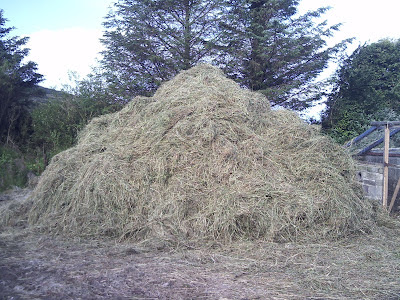 Howdy Folks.   That's my haystack of loose hay from last year.  I got somebody to mow it and turn it, and we turned it with hand pikes and made enormous windrows, and we brought (piked again) it down from the field and placed it in a giant heap.  Praying that that there would not be any spontaneous combustion (spot the Ted Nugent track?) then it was all piked into the barn.

Before that.  The land got a good splattering of cow muck (piked again with tractor and box) and one bag of  Gran Lime.  The hay making operation took 5 days in total and I had several nights worrying if it would rain and ruin my hay.  You don't have the same worries with baled silage.

I reckon (not including my fuel of stout and ham sandwiches) that it cost me 120 Euro s (about £100) to get an acre or even a full barn of hay.  I started feeding it the new cattle in August and we still had some left until just after Christmas.  The great thing about loose hay is there is very little dust and the cattle thrive on it.  You can even get somebody to bale the hay if you want.  We can't put the baling string manufacturer's out of business can we?  Even that's made of plastic or even polypropylene these days.

Also when you grow hay it reseeds the field.  Lets pray that we can make another large crop this year.  If not I will be buying silage.   The construction to the right of the haystack is the duck pen.  It's covered in chicken mesh to keep the fox away.  Well that's the idea any way.


Here's a bit of nostalgia for you.  It was made in 1924.  If you ever get to see the OPEN ROAD don't miss it.  I love the labourer drinking his cider and the Oxen pulling the hay-carts.


If you click on to their titles you will find lots more incredible film footage of England's green and pleasant land.  Why can't we go back to those times?