Rhododendrons: Flower of the Orient and in Flower in Ireland

It rained for about six months in Ireland from September until March.  We cursed and called it and cursed and called the rain again.  The last few weeks haven't been so bad (brilliant at times) and the Rhododendrons seem to have used all the nutrients (rain is like bitter.  It's full of vitamins!) to make an amazing amount of flowers this year. 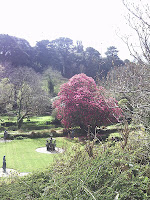 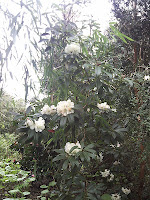 The old Rhododendron Ponticum seems to like the Irish climate it very much.  Lots of rain and very mild temperatures.  The peat soils make excellent soil for the plants to thrive. I believe the first Rhodies came to Britain and Ireland in the late eighteenth century.  They were thought to be ideal for game birds to shelter under and they put on a spectacular show.  Some people say that they are a nuisance and poison the ground and smother all the native foliage.  I am not saying they are wrong but?  They do put on a pretty spectacular show for us don't they?