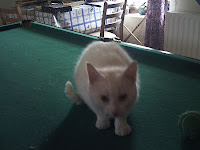 Gosh we've had a lot of weather lately haven't we?  Last night we got one of those Atlantic gales that make you very very afraid.  You wouldn't put a milk bottle out in that weather, even the rats were wearing fur coats. Yes the old ones are the best!!

Talking of fur coats.  We employed a new worker in the farm the other week.  He's the white lad in the photograph.  We got him to live in the farmhouse and to eradicate a few stray field mice.  His real name his Sugar but I Christened him with his first name Alan.  Everybody on the smallholding calls it him now.

Anyway folks he's also clearly a cat of leisure.  I have attempted to explain that he's not got the right snooker equipment and he should really wear a waistcoat.   Alan doesn't care though.  Hope he's paying for the light?

I'm off to town this week to the post office to see if I can get him a CAT LICENCE.  Well they used to ask for them on Monty Python didn't they?
- April 18, 2012