A Topical Allotment Song. ("Oh it's p*ssing it down.")

There is still no chance of me doing any kind of cultivation nay earth works on my smallholding vegetable plot at the moment.  It's times like this when I often hear myself singing  one of my son's compositions. Pray let me explain dear readers.

Repeat for ever and a day.

One old man who looked like a farmer (chewing grass, wearing smock, not really..) thought number 2 son's song was hilarious.  Whilst a few old ladies shook their heads with very sullen expressions.  I just laughed and we made a quick exit out of the supermarket.  I mean I could hardly chastise him could I?  I wouldn't be surprised if I had composed the song myself.

Here's another one of my favourite Christmas songs for you:  Jethro Tull: "Ring Out Solstice Bells."  It's the shortest day this week (21 Dec) and I thought it's topical and a celebration of the old Celtic Winter Solstice.  I have been  lucky enough to see Jethro Tull a few times and they have done some pretty awesome tracks down the years.  'Songs From The Woods' and 'Heavy Horses' are my two favourite albums.  When you listen to the lyrics, you realise what an ecological and environmental thinking band they are.   Enjoy.
- December 17, 2012

I saw this pink and white Convolvolus or Bindweed growing through a Laurel hedge the other day.  I was knocked out with it's  beauty an... 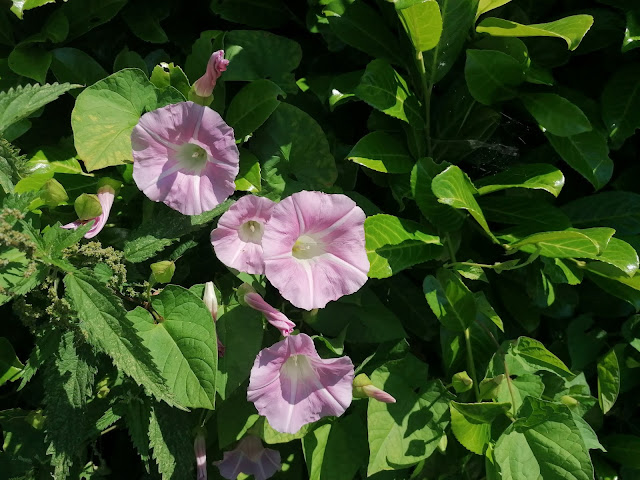