Fifty Miles To Tesco, A New Tractor Exhaust And Why Don't The County Council Cut Verges?

"As I was going over the Cork and Kerry mountains" (any one for a Thin Lizzy song?) yesterday.  I noticed how overgrown the hedges and grass verges are this year.  Perhaps its all last years rain?  But something needs to be done.  Why can't they employ smallholders like me to strim and cut back these dangerous road edges?

I suppose it's all down to council budgets and the countryside wildlife legislation that doesn't allow for foliage to be cut during the bird nesting period - March to August?  So why are farmers allowed to cut silage or hay?  Does wildlife not nest and have young in the fields?  Hares don't make burrows and the Lapwing nests in grass do they not?

Apparently the making of silage instead of leaving the grass to go to seed and eventually become Hay.  That is said to be one of the biggest reasons for the decline of the bee.  There are not enough wildflowers for them to pollinate.  It's been mad busy in the Irish countryside with the farmers busy making silage (round bales and pit) and spreading slurry for a second cut.

Any road we got to Killarney and had an argument in Tesco's.  The usual one:

"What do you want for your tea?"

Twenty minutes later.  We bought a cooked chicken.  Food for us and the 2 dogs and Domino the cat.  Then we went to Aldi and bought one of those 'patio' furniture sets (4 canvas deck chairs and a glass (real plastic) table top and a canvas parasol.  We saved thirty Euros by buying it instead of a similar one back in the town near us.  Then we went in Home Base and looked at paint and wifey said:

"It's too hot for that.  You are not starting bloody painting."

Well I did offer to paint the bedroom.  Not that I would paint behind the wardrobe or even empty the room!

On the way back we stopped at a tractor workshop/garage and I bought a second hand windscreen frame for the Ford 3000 and a brand new (they say "Span new" here in West Cork) exhaust for the Ford 4000.  I think I could get into this shopping lark!
- June 21, 2013

Yesterday was 25 degrees and we went to two carboot sales.  One in county Cork and one in county Kerry.  There was a myriad of items for sal... 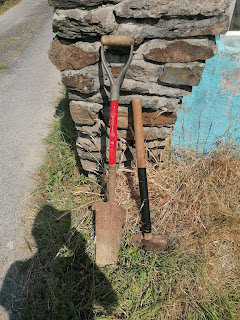