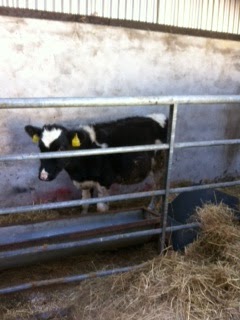 I haven't been sleeping very well the last couple of nights.  So I woke up yesterday morning about five thirty and couldn't get back to sleep.  So I decided to take a couple of Paracetamol with a glass of water and the next thing I know, it's 9.30!  That is so unlike me.

So I got dressed and made a quick brew (ground coffee in the cafetiere) and looked at the blogs and emails and made my way to the cowshed.  One of the heifer calves was lying down on the slats and the others were mooing for their barley and calf nuts.  The calf didn't get up and one of them stood on her.  I suspected there was something wrong with her.

I don't know why the cow slats don't have grips on them.  Perhaps it's because it would make it difficult to clean them? A lot of farmers buy rubber mats to go over the slats to stop cattle slipping.  It's 40 Euro for a good rubber mat.  So it would cost me 400 Euros to cover our slats.  Apparently slips and broken legs are very common in slatted houses.  You try to make life easier, not mucking out.  But there is also the animals welfare to think about.

By this time the missus had walked in the cowshed and I told her to get number one son to help me try to stand up.  We deduced she had slipped on the concrete slats and banged her leg.  Her cloven hooves wouldn't allow her to get a grip.  We rang a farmer up the road who told us to drag her outside and she will be able to stick her hooves into the grass paddock.  We also gave her an injection of antibiotics and put the calves out with her for the day.

Every twenty minutes or so we would check her.  Sure enough.  She got up and had the pick of grass.  Then lay down for a few hours and got up again.  We decided to make her a pen in the cowshed with a straw covering over the solid concrete and we tied a farm gate to make the pen.  Then we put in a feeding trough, gave her some hay and a tub of water to drink.

This morning she got up to eat the nuts in the trough and she seems to be limping a bit.  But she's had four plops (experts say they leave twelve cow pats a day) and she's chewing her cud.  You can't afford to call for the vet every day.  I am pleased to say I think she will be OK.  Do you try and cure your animals when they are ill or get hurt?
- November 30, 2014