A Nice Single Malt For The Long Winter Nights On The Smallholding. "Am I going Through A Smallholding Middle Age Crisis?" 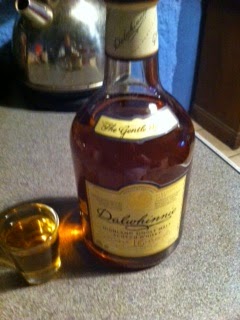 A kind friend phoned the wife saying they had just returned from an holiday in Scotland and they had picked up a 15 year old bottle of Dalwhinnie ("my favourite") whisky.  We could have it for x amount of Euros if we wanted it? Wanted it?  Was George Best called Best because he was the best?  Of course he was.  Does anybody else have a favourite tipple?  We are supposed to be saving it for Christmas.  Unfortunately the bottle is now half empty.

At least we can get Newcastle Brown Ale and bottles of Vimto in Ireland, these days.  Perhaps some one will open an English pub serving regional grub and pints of real ale?  I have been in plenty of "Oirish " pubs in France and Portugal.  So why not a few English pubs in Ireland?  I read somewhere that Wetherspoons were supposed to be opening a few pubs in Dublin and Cork.

I would also like a Ox red Chesterfield three piece suite to go with the whisky.  Perhaps I could get one of those Basil Rathbone "Smoking" jackets too?  Not that I smoke any more.  I haven't smoked for over twenty years and I still miss them.  Do you?  The amount of people I have got talking to just because somebody said:

Perhaps I should get a pipe?  Do smallholders go through middle age crisis in the countryside?  If you lived in another country what English/British food or drink would you miss the most?  Bill Wyman missed Piccalilli when he lived in France.  I miss real ales and public transport!  I haven't mentioned that for a few weeks, have I?