Weren't The Smallholders Small Years A Go? Part One.

We finally decided to raise the height of the old hen house yesterday.  I am five foot eleven and number one son is 6 foot 2.  The number of times I (we) have banged our heads on that piece of wood above the door.  I have nearly knocked myself out a few times.  The air would often be blue with swear words.  Words that you would never hear on the Archers.   Words like: 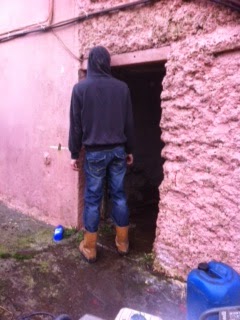 Some time later.  We have removed an old flag stone lintel and lots of rubble stone.  We also found an old rats nest behind one of the stones.  Thankfully the rat wasn't at home.  Number one son attempts to wrestle with a cable going to an outbuilding.

We replaced the wooden and flag lintels and raised up the new metal lintels and built blocks on them.

No longer will we need to bang our heads.  Number one son just needs to cannibalize and weld a new metal door and we will use the old hen house for storing tools and farm stuff.

Next time I will (hopefully) show you the new door. 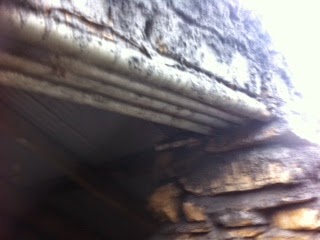 
The new door space for the hen house.  All it needs is the door.  The cost of the smallholding hen house door alteration was 10 Euros.  That was for two bags of cement.  We had all the other materials lying around the smallholding.  Just shows you shouldn't throw anything away, you might need it? 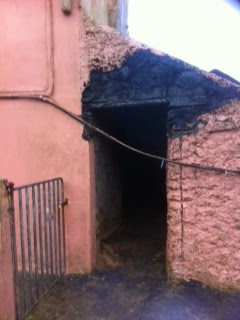