"Please can I have twenty Euros of petrol, a pastie and a ticket for the rubbish machine?" 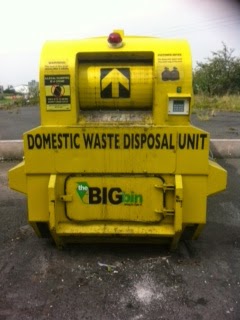 I think I saw the future ("Garlic bread..") the other day when went to a petrol station in Limerick.  You pay 6 Euros for a ticket and tap the code into the domestic waste disposal unit.  You have a minute to put to your two black bags of rubbish in the machine before the door closes.  I think its a great idea and it certainly saves people money not having to pay for their rubbish to be collected and pay by the wieght and a service charge.

Petrol stations seem to be mini supermarkets these days.  There's a petrol station in West Cork that sells pasties.  Just like those we use to eat when went on holiday to Cornwall.  We often stop off at petrol station for a breakfast roll.  But you don't attempt to buy food on a Sunday.  All you get is: 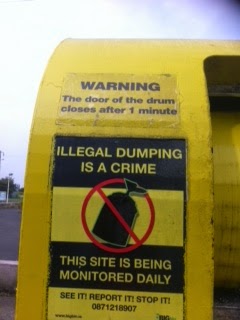 I wonder what happens to the rubbish?  Will it go to land fill sites?  We try to recycle what we can.  Councils should have a lot more litter bins.  Preferably one's that you get more than two fingers in.  Don't the wasps like the bottle banks?
- September 14, 2014