A Day Of The Triffids On Another Walk Along The Sheepshead Peninsula.


We went for another walk today.  Four miles this morning and three miles this afternoon.  The countryside seems so quiet at the moment.  An occasional car or van (once every five minutes or so) passed us whilst we walked along the tarmac main road  road towards Gearhies.  I saw one man with his dog walking on the pebbly beach at the bottom of Fahane.  But we didn't see any body else.  Most people seem to have to leave the peninsula to find any meaningful employment.  Don't think many folk make a living in the countryside these days.

We noticed some giant rhubarb (Gunnera Tinctoria) growing at the side of the road near one of the beaches.  Apparently it's said to be an invasive species and was probably washed up during a storm.  The seeds are said to have come from Brazil and Chile.

Yesterday I blogged about potato planting.  The potato is another South American native along with the Fuchsia hedgerows that are so familiar on the West coast of Ireland.  I bet a lot of gardeners would like the Gunnera for ornamental features in their gardens. 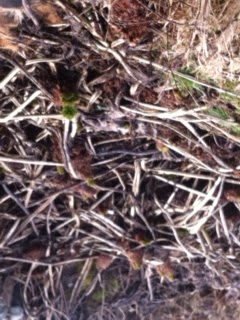 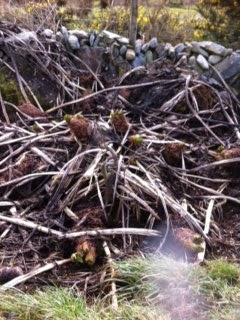 New shoots peeping through after the long Autumn and Winter.  It dies right back and then grows enormous rhubarb like foliage in the summer.  I think it's incredible how nature can establish itself thousands of miles away from it's home.

Do you have any none native species growing near you?  Most vegetables originate from all over the world.  I suppose most of the plants and tree are from foreign shores?
- March 09, 2015

A Saga Holiday In The Sun By Mistake And The Day I Met Bikini Lady In The Lift.

In 2019 number two son paid and booked for me and his mum to stay in an hotel in the Algarve.   The taxi from the airport took us to the bi...