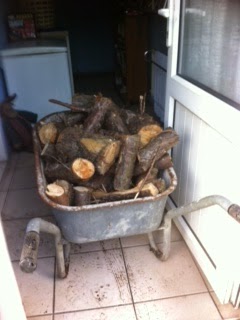 It was throwing it down on Monday afternoon.  I had been asked to cut some logs up with the chainsaw.  Number one son ended up operating the saw and I took upon my usual smallholding farm labourer role.  I rushed to our dwelling with the loaded wheelbarrow and decided that I would wheel them into the range in the kitchen,  Instead of filling the plastic crate with logs and carrying them backwards and forwards to the log box.  Trouble is the freezer in the corridor blocked my way.

Somebody then chastised me for leaving muddy tyre prints on the tiles.  Well it's a change from muddy boots isn't it?  That's why we put down the tiles because we live on a farm.  The terrier and cat also Christen the tiles with their paw prints.  At least we have a mop and carpets in the bedrooms!  The mop doesn't live in the bedroom though.  We keep that with the coal in the bath!  I am joking!
- March 04, 2015 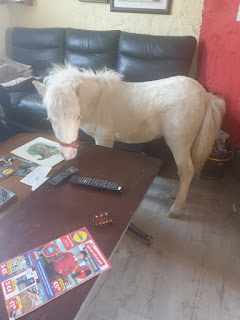