Another One Of My Walks Along The Dragons Back.

We went on another one of our walks on Monday.   We travelled by car along the narrow and precarious road up the Goats Path.  It's one of the most spectactular scenic roads on the Sheepshead Peninsula.  Plus it's on the North side (Northsider blog name) of the peninsula.  You can see the Beara Peninsula, our peninsula and the Mizen peninsula.  Three peninsulas sticking their fingers out into the Atlantic.  You can even see the Fastnet lighthouse from up here  They use to call it the the 'Teardrop of Ireland'.  It was the last part of Ireland the emigrant ships would see. 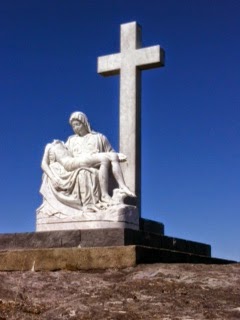 We parked the car next to this pieta.  It's featured in Mike Harding's book: Footloose In The West of Ireland.  Apparently the Calvary was put there by a local man who made good in America. 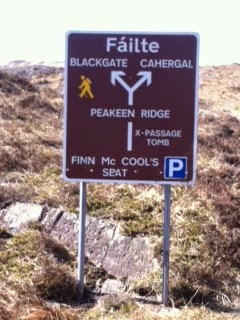 We just went for a saunter up the Peakeen Ridge to the ancient X-Passage tomb. 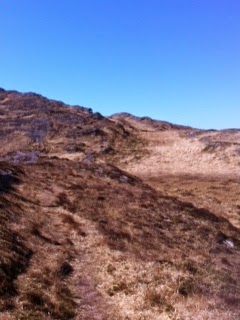 I christened it the :'Dragon's Back'.  Because the mountain is all scaly and undulated like a stone dragon's back.  No I haven't been on the Poteen ("white lemonade") again.  I have just got a vivid imagination and lots of time to go for walks. 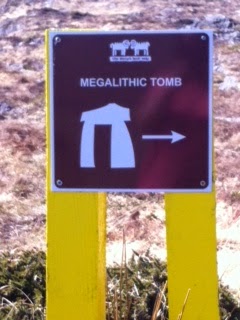 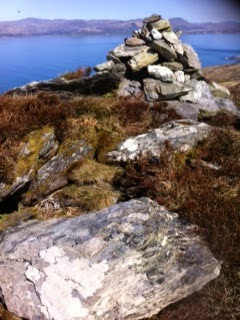 The wedge tomb of some ancient chieftain.  I believe it was found when they made the route for the Sheep's Head Way.  You just follow the yellow oak finger posts. 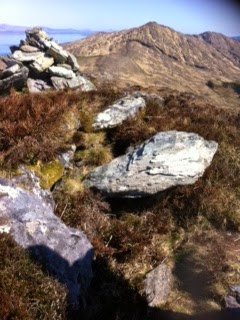 The chieftains ashes would have been buried in the wedge tomb and a stone cairn placed on the top. 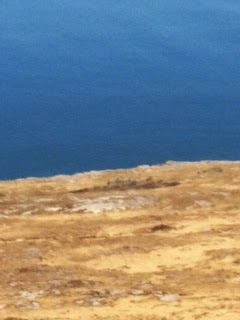 We walked 4 miles and people much younger than us spoke and passed us on the descent back to the car park.  Yet another sign we are slowing down and getting older.  Time waits for no one, does it?
- April 09, 2015