Seaside Grazing For The Girls.


Here's a blurry picture of my cattle taken this morning from a distance on the old mobile phone.  We live in the countryside next (Bantry Bay) to the sea.  That's the Beara Peninsula across the bay.  I often think if we lived in a tourist area in say England or Portugal.  The land would be full of hotels, villas and campsites.  But it's not, it's rural Ireland.  The land is used for cattle and sheep and growing hay and silage. 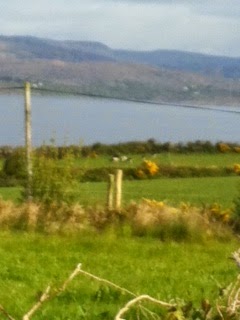 There are houses and farms but very little infrastructure where we live.  There is no public transport or shops or a pub or even a bottle bank on the North side of the Sheep's Head Peninsula.  But it's a beautiful place and I always wanted to live here.  I think most rural places lack infrastructure. 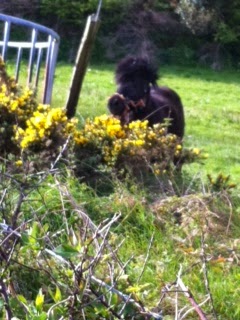 Bracken the Shetland pony eating the 'Furze' (Gorse) flowers.  He uses the electricity cable straining pole to scratch his back.  The Furze flowers smell like Sun tan lotion at the moment.  The fields are abundant with cuckoo flowers too.  I have not put out 'bag manure' (granulated fertilizer) this year.  Don't think we will need it with only having 6 yearling heifers.  Apart from the odd worming injection.  You could say we are almost organic.

Think we will buy hay this year instead of growing silage.  There won't be the huge expense of paying silage contractors to make it for us.  I will buy small square bales of hay for new calf replacements in the Autumn.  Or if the pasture gets too strong and in front of the cattle we will make some hay ourselves.  It all depends on if they eat the grass and what the weather is like.

John Seymour wrote: "When you buy hay you buy land."  Think he had a point.