Keeping with a music theme for another couple of posts.  We saw 2 more performances on Friday night at the inaugural Killarney Folkfest.  It was a bit like going to Glastonbury because you got a green wrist band placed on your wrist.  This allowed you to go outside and into the main hall. 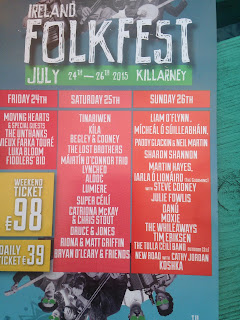 Any way the first band to kick off the Killarney Folk Fest was Keeva.  They played a little stage just outside the Killarney INEC building.  I think they should get mainstage status next year.  They are made up of Alan Doherty (flautist), Tola Custy (violinist) and Gerry Paul (Guitarist).  They play traditional Irish and contemporary music.  Gerry Paul also writes children's books and sings songs aimed at kids.  They performed one song called:

It's a really catchy tune and here's a video of it I found on You Tube:


I think Keeva are great.  Here's a video of them playing more traditional music on the Irish television channel TG4.  It's called: "Hangaw".  The flutist reminded me of Ian Anderson from Jethro Tull.

Think I will go to Killarney for the weekend next year.

Pictures From My West Cork Gardens In June.

I couldn't think of much to write about so I have had a week blog break.  This morning I walked around the gardens and the flowers were...