Thanks for the comments on my last post and also for reading it.  Following on from last post.  We decided to have a go at making Hungarian Goulash  yesterday.  Here you are: 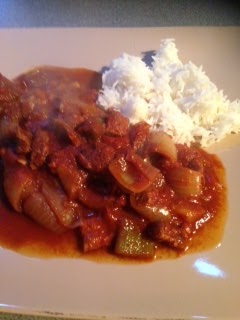 This is is said to be a traditional meal that can be either a soup or stew.  It's said to have it's origins from the Hungarian cattle and sheep herder's who lived in the Hungarian countryside.  So it can be made with mutton or beef.  I believe in Germany they make it from sausages.  I love Paprika and I think it gives a bit of thump instead of plain beef stew.  I found the recipe on the BBC Hairy Biker's Recipe page.

I would love to visit Hungary one day.  One of my favourite (seen them 4 times) English rock bands is Jethro Tull.  One of the songs from the Crest Of A Knave album is called Budapest.  Thanks to You Tube and the kind folk who put these videos on there.    Anybody else like Jethro Tull?