I was trying to contribute to dinner time conversations at my workplace the other day.  I raised the subject of the second world war or the 'emergency' the Irish called it.  Ireland was neutral and my English mother's brother served on a British Navy minesweeper.

Amazingly he was in Bantry Bay for a while.  Little did he know his little sister, my mum would in a few years be marrying a man, my dad living across the water on the peninsula facing him.

Apparently it was quite common for the British Navy to be patrolling Bantry Bay and U Boats surfaced in Dunmanus Bay and they would go into Durrus and Kilcrohane for the 'messages' like cigarettes, Tatyo crisps, red lemonade and peat briquettes and Guinness and newspapers like The Southern Star...?

There have been Luftwaffe  air crashes around West Cork like Dunbeacon near Durrus and Dursey Island near Castletownbeare.

One of my work colleagues contributed an amusing anecdote: Apparently he had worked with a man who had an old wrist watch belonging to one of the crashed planes Luftwaffe air crew.  There was an engraving on the back of the watch in German.

He thought it would be a great idea to get the engraving translated and he would hopefully trace the name and hopefully find the airmans relatives and present them with the watch.  So he took it to a local Jeweller in his West Cork town.  And he said he knew German and he could tell him what the engraving said:

Dining Time For The Cat And The Dog.

Keen eyed viewers will have noticed this picture on Tuesdays post. It's a photo we took last year or so and it's been put on a tile... 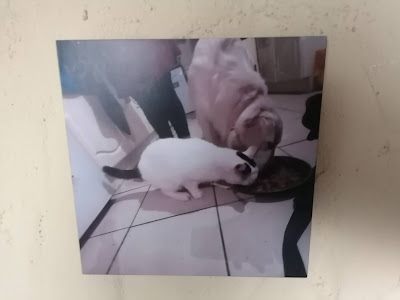