Scenes From Our Smallholding. 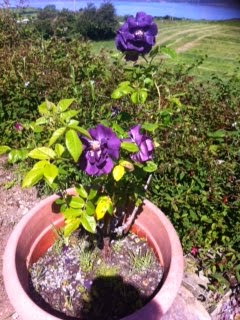 A photograph of a rose on our patio overlooking the field that's just just been cut for silage this morning.  The blue in the background is Bantry Bay,  West Cork, Ireland.  I live on the South side of Bantry Bay and the 'North' side of the Sheeps Head Peninsula..  That's why my blog is entitled' Northsider'.  That plant pot could do with topping up with compost, couldn't it? 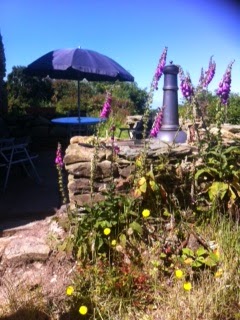 It's 28 degrees today.  That's a picture of our home made patio.  It was originally an old pig sty and it took us 2 days to remove all the farm detritus.  We paved the patio with second hand slabs that I had in the vegetable garden.  The patio cost absolutely nothing to make.  I let the Foxgloves and succulents (Solidago) self seed and grow in the dry stone walls. 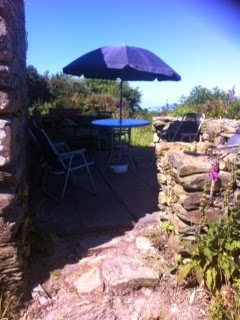 The parasol, table  and chairs cost 62 Euro.  I spent an hour the other day hand weeding between the paving stones.  Must get round to pointing them up some time. 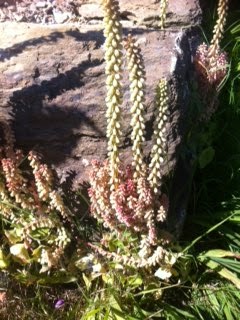 Close up of the Solidago plant.  Anybody familiar with it? 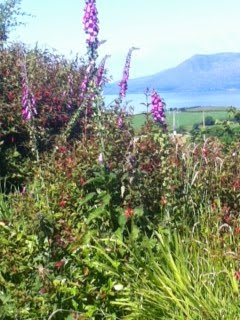 Foxgloves growing next to the Fuchsia hedge.  You can see Hungry Hill mountain in the background.  Daphne Du Maurier wrote a book about the copper mines.  Margaret Rutherford starred in the film. 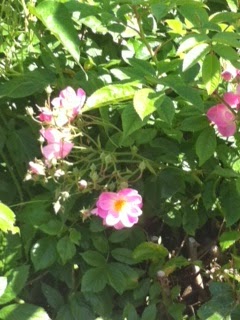 Native 'Dog' Roses.  They grow in the hedgerows and we have one growing in the front garden.  I have planted cutting of them in the veg plot and they look - amazing what? 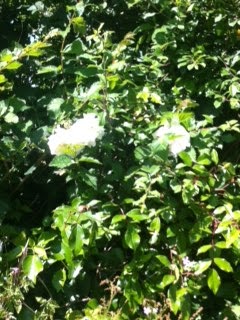 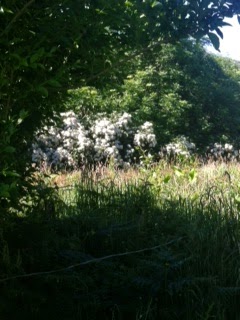 'Olearia' hedge flowering.  I planted this about 10 years ago.  It's a seaside plant with salt resistant, leathery foliage. 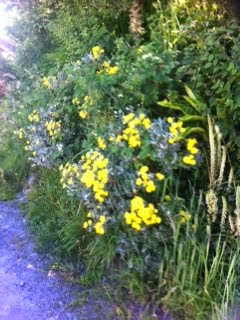 Senecio growing on the rock outside the farmhouse.  It's a native of Mexico and my grandparents planted it many years a go. 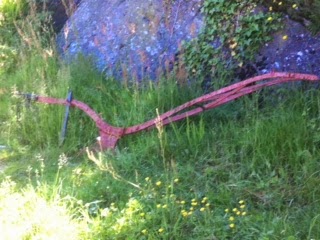 A 'Star' horse plough made in Wexford resting on the grass next to the rock.  A fitting retirement for such an hard working piece of smallholding equipment. 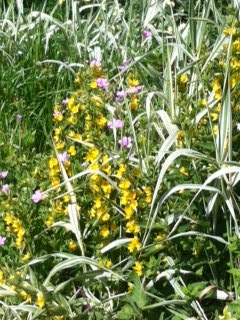 Lyschimachia Punctata (Yellow Loosestrife) among st Cranes-bill Geraniums and variegated 'Zebra' grass.  I brought my perennials from England in a dustbin and I am always dividing them in Spring and Autumn to make new plants. 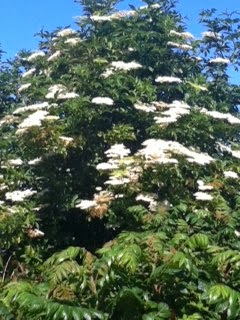 Elder flower in the field boundaries/garden.  We try to keep a wild/country feel to the garden and not to make it too cultivated. 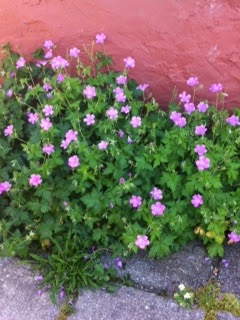 An hardy Geranium that self seeded into a gap between the paving that we let grow. 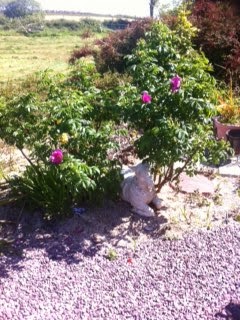 "Rugosa" rose.  This is another seaside plant and makes a great hedge.  The sheep in the picture is made of plastic.  Well we do live on the Sheepshead Peninsula.
- June 18, 2014