Moroccan Meatballs. Catering For An Army!

We are always looking for new recipes to cook.  The missus came home with a SuperValu (Irish supermarket) leaflet yesterday.  So we decided to give it a whirl on top of the range. 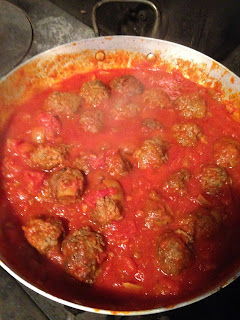 It only takes ten minutes preparation and 30 mins to cook.  You make 24 meatballs from 454g of minced beef.  Season it with salt and pepper and cook in the oven for 15 mins.  We cooked it on a baking tray on top of our range.

Meanwhile (back at the ranch or smallholding) I warmed the olive oil (where's Popeye?)  and a chopped onion in our skillet on top of the range.  Then we added a teaspoon each of garlic, cumin, coriander, turmeric, ginger and added 2 tins of chopped toms.  Let it simmer for 10 mins and seasoned with salt and pepper.   Then we cooked the meatballs in the sauce for another ten minutes.

To serve we made couscous from a packet and just added boiling water.  The meal was different but nowhere spicy enough for me.  I think it's with using dried spices.  We could do with some ethnic food shops moving to West Cork.

We also made too much.  It was supposed to be enough for 6 people after all.  Hence the catering for an army title.  Do you make too much food?  I am also told that I use every pot and pan when I attempt to cook.  I have lived in this house for thirteen years and I still don't know where any cooking utensils live!

Did I tell you about the time when I asked my wife once to order me a kebab?  In England you can get mild, medium or hot.   I told her to tell them tell to make it 'super hot'.

Inside the kebab house.

"Yes that's what he wants."

Half an hour later.  I takes a bite of my Doner kebab.  I think I had just swallowed some volcanic lava.  I was like a mad bull.  But the steam was coming out of my head not my nostrils.  I honestly thought I was going to die.  Oh and drinking pints of water, beer, flower vase water..., does not work.  I never asked for a 'super hot' Doner kebab again!

Back In The EU.