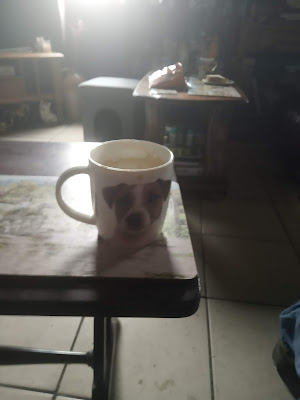 We have had three Jack Russell Terriers since I have lived here in Ireland.  They are one of our favourite breeds of dog along with the Border Collie.

I have the cup with a Jack Russell on to drink my black coffee every morning.   The wife drinks out of a cup with Border Collie dogs on it.

I seem to have fallen off the old blogging horse now the weather is turning for the worse and I  have been struggling what to write about.  So I was sat drinking my black coffee this morning and noticed the terrier looking back at me.  So I thought  I would write about them.

The Jack  Russell Terrier breed is over 300 years old.  A fox terrier bitch called Trump was the Reverend John  Russell's first mother of the breed named after him.

We have had three Jack Russells since we have lived here in the countryside next to the sea.  Toby had the bravery and heart of a lion and he would think nothing of stick down an hole in a ditch or a tree.  Fido lived until she was 17 and we talk fondly about them every day.  There is never a day they are not mentioned. Fortunately  we still have Scamp to keep us company.

Here's to the terriers, enjoy the video.