I have done a post on my vegetables for a while.  I seem to have had such little time for vegetable growing with me working full time on the island and the wet weather tyesterday doesn't help either.

I did how ever manage to plant my Japanese onions sets outside in the old plastic baths filled with soil and my homemade compost.  They are a very hardy onion and don't mind the Irish climate.

The Roman's apparently never set foot here but they named Eire "Hibernia , meaning " land of eternal winters".   They must have been on a stag do to Dublin when they gave Ireland that name? 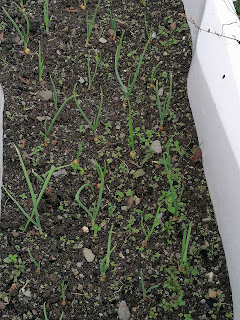 The Japanese onions are a bit weedy but they are loving growing in the old baths filled with soil and topped up with homemade compost.  They will be ready to harvest next June.  We often pick them before they are fully grown. 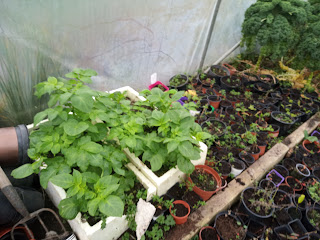 I wish I was only working three days a week and I could spend more time in the veg plot and polytunnel and go walking a few times a week.

I only water twice a week now in the polytunnel.  It's full of plants and they have managed quite well with out me.