I once knew a man who use to keep his now grown up children's bikes and prams from childhood underneath a hedge in his garden.  He hadn't got the heart to get rid of them and he realised how soon they grow up and fly the nest. 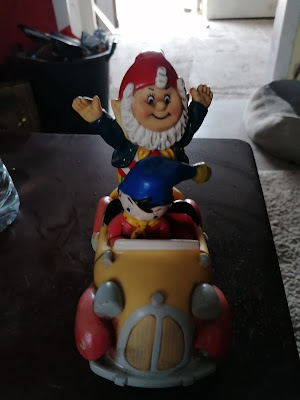 We have been carrying out some house improvements like a new secondhand kitchen, laminated flooring and we replaced the Stanley Range for a new second hand Rayburn oil range...  So it's been Bedlam right through Christmas and we might be back to normal for next Christmas?😊

The plus side being we have found some treasure like Noddy and Big Ears in the Noddy car.  It's at least twenty five years old probably older than Number  1 son, we bought it for him back when he was born or very little any way?

The wife gave them a bath in the sink and dried it and it's on display on the shelf next to the cookery books.  There are no Peter Pans  in our household, the boy who never grew up.  But there are some things we won't get rid of.