Remembering The Shawlies In Cork City.. First published in 2017. 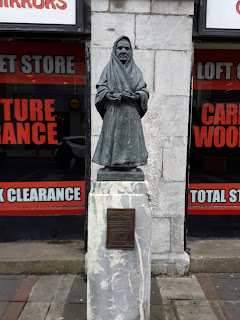 I published this in December 2017.  There's a lot of talk about statues this week.  Here's one that celebrates ordinary people not politicians.

We went to Cork city yesterday and we noticed this statue called the "Onion Seller".  It's a sculpture by Seamus Murphy.  I wrote a blog last December about his statue : an speir -bean in Killarney. 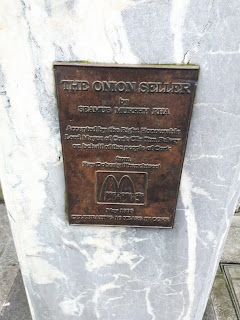 The statue commemorates the "shawlies" women market traders who use to sell their wares in the Coal Quay area of Cork City.  I think its great how the statue remembers working class people who lived there.

Update:  I Googled: The Shawlies and the Four Courts Press have published a book called The Shawlies, Cork women street traders and the merchant city 1901-50 by Susan Marie Martin.  It sounds fascinating!

Statues  can be controversial and stir emotions.  For me the 'Onion Seller' stirs warmth and dignity.  The  'Trinity' outside Old Trafford makes me happy.  A statue of someone like Margaret Thatcher makes me annoyed.

What do you think?