Yet Another One Of My Bus Tales!

Donkey years ago I was upstairs on a completely EMPTY bus.  This bus entertainment creature plonks their self down next to me and says:
“Is there anybody sat next to you”?
“Of course there is.”
Thinks me:
“ I have just been talking to Saint Francis of Assisi about Margaret Thatcher’s first speech as prime-minister of Great Britain and Warrington?”
The man was obviously a few butties short of a picnic.  I duly decided to vacate my seat and get off at the next stop.  But of course I didn’t.
It  was probably my own fault, thinks I.   I had decided to go shopping in a neighbouring town.  I caught the early morning bus.  It was full of people dressed in factory and shop overalls.  Suddenly this gentleman bursts into song at the top of his voice:
“Onward Christian Soldiers.  Marching as to war. With the cross of Jesus.  Going on before.”
Some people laughed and applauded.  Most just sighed and tutted:
“It’s the same every bloody Tuesday,”
Said this very unimpressed woman.
We used to make our own bus entertainment when I went to school.  We didn’t have Nintendo’s and those MP3 players.
We went to the local secondary modern school.   Sometimes we would go the local baths.  My friend (the lad who helped me feed the polar bear our butties at Belle Vue Zoo too, remember?) and I use to buy tubes of Bob Martins from the local pet shop for our consumption and of course we would always eat Robertons jelly cubes.  We didn't have designer sports bags either.  A Kwik Save or Asda plastic carrier bag would be used to carry ones swimming togs.  Some bright spark would make an hole in the carrier bag  with a cigarettet or their fingers and eventually you would be walking home with your wet towel and trunks in your arms.  Happy days!
On the way home we might board the bus.  This was always cram packed with schoolchildren from the local Grammar school.   They never brought their grandparents with them though!  Sorry.
Every week one of us, the eleven plus failures.  Would stand up and give the gathered upstairs audience, a grammar school  take  the Michael concert.  Upper crust snobby voice:
“Oh hello I’ve got lots of homework today.  We’re doing trigonometry, physics, hockey and algebra, really spiffing what?”
The working class kids enjoyed the free concert and laughed at the show.  The grammar school kids just tutted and shrunk back into their books.


A few years later most of the working class kids from my school were on the dole.  The grammar school kids were probably no doubt spending their university grants on subsidized student beer, and p.a systems called stereos or having years off in a kibbutz in Israel....?  Oh to be a swat or to be intelligent even!
- February 09, 2019

That's a photo of our front room stove.  One thing about living in the countryside next to the sea you can still have a domestic stove ... 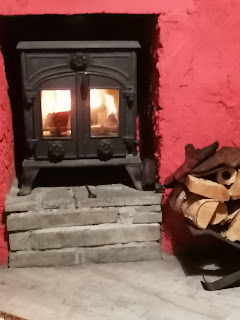