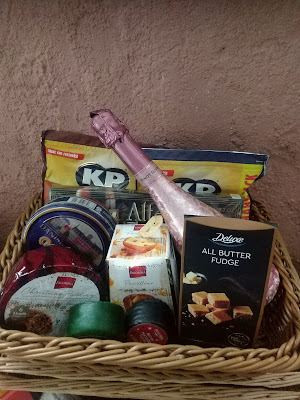 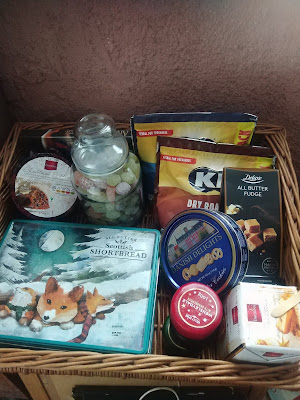 We were in a charity shop here in West Cork the other week.  The wifey picked up two wicker baskets and we both said out loud: "Hampers"!

For the princely sum of 2 euro a piece.  We purchased the two baskets.  For the last few weeks or nearly every day supermarket trip.  We have been buying "A little  bit of what you fancy".  You know: jars of sweets, bags of fudge, tins of biscuits, English Cheddar, Christmas pudding, peanuts.., you name it.  We haven't  missed them either.  Just a Euro or 3 or four.  Two Christmas hampers for next to the blink of an eye.  That's  two presents off the list.  All they need is some sellophane.

We started making our Christmas Hampers about twenty two years ago.  I was watching one of those Park hampers television adverts and remarked that I would like one of those.  We couldn't afford one though so the wife made her own Christmas Cupboard.  She started this in September.  Every week she would go in Netto and buy extra items like a bag of sugar or a jar of pickles and they would go in her 'Christmas Cupboard'.  The house rule was you can use them if you have to but they have to be replaced or "put back"!