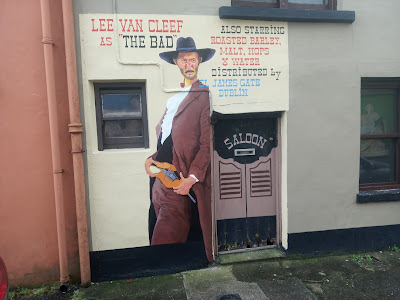 I spotted this wonderful mural (Hilda Ogden said "Muriel") the other day when we went Christmas shopping.

When you have been posting blogs for ten years or so you are always on the look out for interesting things and people watching.

Clint Eastwood is one of my heroes and especially his Spaghetti Western films which a lot of them were filmed in Spain.  He was neither good nor evil.  Probably indifferent or something in between.

The late and great Lee Van Cleef was Clint's main protagonist in the films.  Incidentally good old Channel 5 are repeating these films on Friday nights this month.