A Very Funny Read By A Prog Rock Keyboard Wizard. 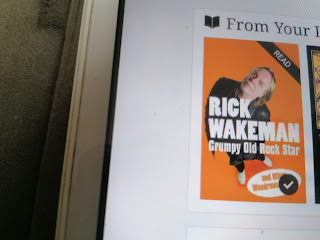 I have just finished reading Grumpy Old Rock Star by Rick Wakeman.  It's  got some really funny chapters and I bought it because reading rock memoirs is another one of my hobbies.

Regular readers will remember me writing about Steve Hackett's A Genesis In My Bed recently.

Apparently according to Kindle I'm on week 25 of my reading spree.

I was lucky enough to see Rick at The Night Of The Prog with Yes in Loreley in Germany in 2017.  I have seen some great keyboards players like Keith Emerson, Jon Lord, Geddy Lee and Steve Walsh from Kansas, the best band in the world in my humble opinion.  I put Rick Wakeman up there with them.

The chapters about him smuggling a KGB uniform out of Moscow by wearing it under his clothes and the hooker in the recording studio are hilarious.   He also meets Fidel Castro and Ronnie Biggs and some crazy characters like the time he went for a meal with Keith Moon and what happened next.

Rick use to drink like a fish.  Rick is very funny and an accomplished musician.

If you want a good laugh I  recommend this book.  I read it on Kindle.

Also: Do you know who played the piano on Cat Stephen's hit single 'Morning Has Broken'?  The hymn was written by Eleanor Farjeon.  I will give you a clue: