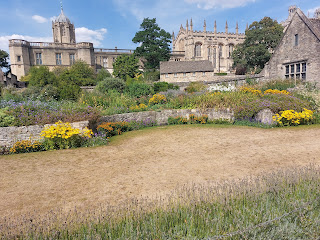 The festival finished rather oddly on the Saturday.  So next morning at  after a large breakfast and a couple of pints of Doombar at nine in the morning  we headed to the train station and bought single tickets to Oxford.

On arrival in Oxford we walked to the city centre and looked for Tourist Information.  A very helpful man in one of the civic buildings drew us some circles on a map on places we wished to visit and pointed us in the direction of a campsite in the suburbs. Apparently the Tourist Information  closed down?

We walked a few miles and noticed a Travelodge.  We decided to see if they could accommodate us for the night.  The very nice lady on the desk said she could and for a very reasonable price.  We began to fill in the form on the website on my phoneand I encountered a problem that it didn't recognise Irish post codes and surprise surprise.  They couldn't accept CASH!

Her male colleague came from the back and some how managed to get round the postcode problem.  I had to ring my wife in Ireland and she rang Travelodge who put her through to the man on reception.  A few minutes later J paid for the room.  This was the first problem we had that day with contact less payments.  The Travelodge staff were so helpful and couldn't do enough for us.  Thank you both so much!  If you are ever near Abingdon Road in Oxford check in at the Travelodge there.

Later that day we walked into an ex Anglican church which was now a wine bar with no beer taps.  I ordered two bottles of lager and they took off the caps and informed me that they didn't take cash!  Fortunately I had my son's Revolut card and I managed to pay for our drinks.  I had other contact less payment problems at a a campsite in Canterbury.  Stop the world I want to get off! You don't have contactless payments in northern England or over here in Ireland.  What happened to cash being king?