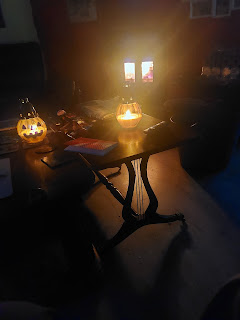 It was an horrible wet and very windy night last night in the countryside next to the sea.

The leccy (electricity) went off twice for long periods of time and we couldn't watch the footity ball or use the WiFi.  I thought of my late mother's old saying when something went wrong or rather depressing:

Luckily I have pay as you go on my mobile phone so I could look at the Internet and read blogs and follow the football matches.

I thought about the people long ago.  How did they manage without radio, WiFi or even television 📺?  They probably knitted, played cards, read the Southern Star newspaper for the fiftieth time that week or maybe even talked to one another?

I believe people were much more sociable and neighbours came round for a few bottles and few drams from the bottle what lives on the topshelf in pubs. People talked one to one and not just by WhatsApp and other social media.

Maybe they played cards or even "spin the bottle"? 😀 No wonder people had such big families with no television. I am joking.  "Who's Joe King?"

It will be a long Winter if we get power cuts this Winter.  We might have to talk to each other?  Do you think we are becoming less sociable or is it just living somewhere with no amenities that makes me feel like this and need to write blogs so much?