One Old AA/RAC Road Sign That's Had A Tough Life! ("Any old iron?")

"One man's trash is another man's treasure!" 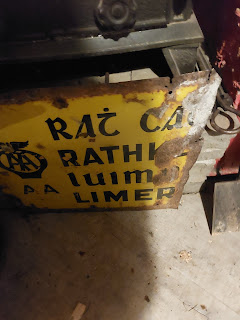 So the saying goes.  Well I bought something the other week from a car boot sale ("where else?") that people would probably sneer and laugh at and others would find it ethereal, nostalgic and beautiful in a strange kind of way like yours truly thinks so.

You have heard of Arthur Guinness.  Well what about half an AA/RAC sign? It's had a tough life.  Haven't we all?  I don't want a return ticket do you?

The AA and RAC are  road side assistance companies that have been going since Victorian times in Britain and also in the Republic of Ireland.

If the sign was intact it would be worth up to 500 Euros/Pounds.  I don't suppose it's worth very much in it's present state? But it caught my eye and I like it in a strange kind of way.

I'm going to hang it on the front room wall and look at it and think about what it like travelling on the roads and boreens of rural Ireland way back when.  It must have been so much easier to see a mileage sign rather than stopping and asking the brown horse in the left field for the wrong directions?  That's an old joke.😊  The American tourist who was amazed that a horse talked to them.