A Bitter Rather Like Some I Have Sampled In Kent.

You can't get bitter in Ireland these days.  There's beer from all over Europe but not good old bitter like they have in Blighty.

Perhaps the Irish don't like bitter like Newcastle Brown Ale?  My favourite off licence in Kerry says Brexit and import taxes makes it too expensive to source from Blighty? 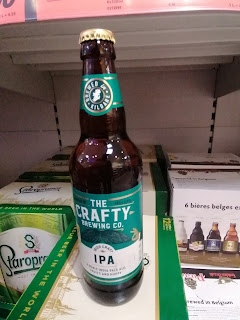 I never wanted Brexit and it's made our economies very  expensive.

I am always trying new beers stuff and a lot of it is like chemical soup or ditch water.

The other day I was in the German garden centre and supermarket and beer providers and found a bottle of bitter.  So I took one home to try. It's an Indian Pale, 6 percent ("Yep"), a craft beer made by The Crafty Brewing Company and specially brewed in Ireland for Lidl.

The beer is very fruity and hoppy and reminds me of the bitter I have drank in Kent in 2019 when I last saw some Prog Rock bands.  It seems like a life time ago.

The photograph was taken in the Lidl fridge not ours! It's better than you commercial lagers and I bought six of them to try after sampling the one above.  I drank it at home not in Lidl I might add.

I think it costs 2 Euros 39 a bottle.  It's a lot cheaper than paying 5 Euros for a pint of gassy lager in a pub isn't it?