Cheap Veg and Fruit For The Pigs And For Us. 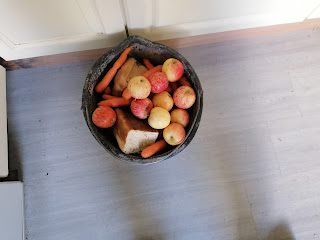 That's a afternoon treat for the pigs.  There's bread which a bakery gave us a cardboard box of hard loaves and the fruit and veg was only 49 Cents a bag from the German garden centre and beer providers and supermarket in town.

I don't grow half the vegetables I use to do because they are so unbelievably cheap.  Even the big high street supermarket chains have started selling vegetables and fruit for 49 Cents.  Plus I have become something of a plantaholic and there is little room for the vegetables.

We buy pig ration and barley but we like to give our livestock a varied diet and it gives the meat a much nicer taste.   Yesterday I strimmed some of a field and took the grass to the pigs.

People and newspapers and the radio and television news complain about food getting expensive.  I find the cheap supermarkets like Aldi and Lidl very reasonably priced.  I think it's because they source so much of their food from Europe.  There's a lot to be said for being in the EU and shopping in the cut price supermarkets.